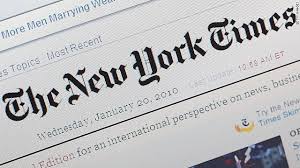 China's action comes in retaliation for the U.S. government's decision to limit the number of Chinese citizens in the United States who work for five Chinese state-owned media outlets. The Times calls China's decision to retaliate an "unfortunate echo of the Cold War."

In its editorial, the Times emphasizes that U.S. media are different from Chinese media in that the former are privately owned and independent, while the Chinese media are state owned and controlled by the Chinese government. Quoting U.S. Secretary of State and former CIA Director Mike Pompeo, the Times argues that China's action "isn't apples to apples."

But while American media outlets are not directly owned and controlled by the U.S. government, the Chinese government could be forgiven for concluding that many of such outlets oftentimes have a proclivity to take the side of the U.S. government in international disputes.