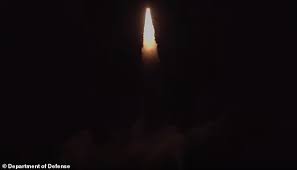 The Pentagon has successfully tested a hypersonic glide body capable of flying five times faster than the speed of sound.

The test was conducted at the Pacific Missile Range Facility in Kauai, Hawaii Thursday night where it traveled at hypersonic speeds and landed on 'a designated impact point.'

Known as the Common-Hypersonic Glide Body (C-HGB), the vessel will be used as the base for the Department of Defense's hypersonic missile.

The glide body is set to be accessible to all US military branches, allowing them to customize the base with weapons tailored to their needs -whether it will be used on land or sea.

Vice administrator Johnny R. Wolfe, Director, Navy's Strategic Systems Programs, which is the lead designer for the C-HGB, said in a statement: 'This test builds on the success we had with Flight Experiment 1 in October 2017, in which our C-HGB achieved sustained hypersonic glide at our target distances.'

'In this test we put additional stresses on the system and it was able to handle them all, due to the phenomenal expertise of our top notch team of individuals from across government, industry and academia.'