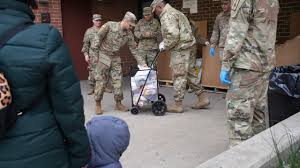 But what's happening in this country is exactly what our founders warned us about, and martial law is something they took very, very seriously.

What is martial law?

If you're looking for a definition, then Martial Law basically means using state or national military force to enforce the will of the government on the people.

Under a declaration of martial law, Constitutional freedoms and liberties are suspended, and civilians are no longer entitled to their civil rights. It basically allows the government, or a tyrannical politician, to shred the Constitution and impose its will through military force.

History of Martial Law in the United States of America

"Those that fail to learn from history, are doomed to repeat it."

In one way or another, there have always been tyrants who have used the power of government to suppress and control the public. But if we are looking for specific examples of Martial Law being used inside the United States, we don't have to look very hard or far to find them.

Using the strictest definition of the term, we can see the roots of martial law in America take hold during the lead up to the Revolutionary war. Although there were many reasons for the war, including resistance to taxes imposed by the British parliament, the main catalyst was England's decision to use military troops to enforce everyday law throughout the colonies.