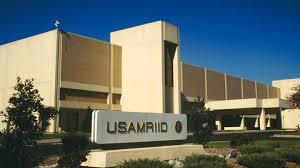 For the past 50 years, the nation's leading biodefense laboratory has been at the forefront of combatting infectious-disease threats to the United States. But the U.S. Army Medical Research Institute for Infectious Diseases (USAMRIID), at Fort Detrick, Maryland, has been largely missing in action from the fight to contain the coronavirus.

So far, more than 22,000 people in America have been diagnosed with the virus, and more than 280 have died from the respiratory disease associated with Covid-19. U.S. infection rates are likely to climb precipitously as more testing becomes available.

At the White House briefing Wednesday on efforts to combat Covid-19, Defense Secretary Mark Esper said that he had just visited USAMRIID, known in military and research circles as RIID, and was briefed on its work on antiviral drugs and vaccines. But RIID scientists have privately complained about their lack of early serious involvement in the Covid-19 fight. And Wednesday marked the first time that an official at the daily briefings had specifically mentioned the lab that had helped suppress outbreaks of Venezuelan equine encephalitis virus in South Texas in 1971, Rift Valley Fever in Egypt in 1977, Hantavirus in the southwest in 1993, and Ebola in Reston, Virginia in 1990, as well as in Africa in 1995.

Instead of a Column