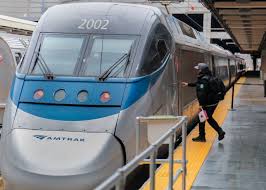 Next up on the list is Amtrak, who is now apparently banking on a $1 billion bailout, according to the Wall Street Journal.

Like other major businesses, everybody staying home has had a profoundly and disproportionately negative affect on Amtrak, which has seen its ridership plummet. And it apparently comes just before the railroad was going to eek out a profit for the first time in its 50 year history.

That's a shame. Perhaps the company should have focused on turning a profit at some point over the last 5 decades a little quicker?

But we digress. Bookings on the company's Acela have fallen 99% through the end of last week as total ridership has fallen 92% across the national railroad system.

Anderson said on Friday the company needs $1 billion in addition to its annual operating subsidy and that the company is now projecting an $840 million loss for the year ending September 30. That loss will come despite expense reductions of $110 million to $150 million.

Those expense cuts include corporate matching of 401(k) contributions being suspended and the top three bands of management taking pay cuts of 20% or more. Workers are also being asked to take voluntary unpaid leave, as layoffs inevitably loom.

Five Days Before It Filed For Bankruptcy, Whiting Execs Got $15 Million In Bonuses

US Factory Orders Disappoint In February... Before Lockdowns Even Began