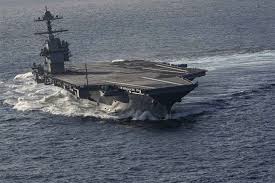 The Navy isn't sure the toilet systems on the USS Gerald R. Ford and the USS George H. W. Bush can withstand the demand without failing frequently, according to the watchdog agency's report on service sustainment costs released Tuesday.

The new toilet, similar to what's used on commercial aircraft, is experiencing "unexpected and frequent clogging of the system" so the "unplanned maintenance action" will be needed "for the entire service life of the ship," the GAO said in the report requested by the Senate Armed Services Committee.

Although the costly toilets are illustrative of the problem, "we generally did not include these types of ongoing costs in our calculation" of the Navy's looming sustainment bill, according to the report.

The report comes amid a debate in Congress, the Pentagon and the White House over expanding the current 293-ship Navy to 355 by the mid-2030, a Trump administration goal.

Navy cost estimators stated that as much as $26 billion of the $130 billion estimated increase in costs "could be accounted for by process changes that resulted in including more indirect costs, such as health and child care for sailors."

Absurdity and the Army: The myth of 'readiness' in the corona-age