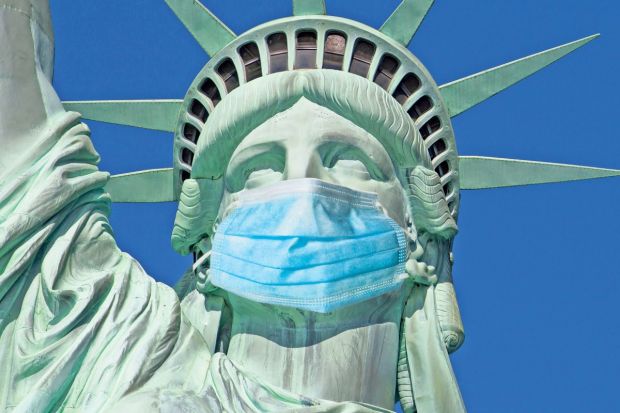 "That was when they suspended the Constitution. They said it would be temporary. There wasn't even any rioting in the streets. People stayed home at night, watching television, looking for some direction. There wasn't even an enemy you could put your finger on."? Margaret Atwood, The Handmaid's Tale

You can always count on the government to take advantage of a crisis, legitimate or manufactured.

This coronavirus pandemic is no exception.

Not only are the federal and state governments unraveling the constitutional fabric of the nation with lockdown mandates that are sending the economy into a tailspin and wreaking havoc with our liberties, but they are also rendering the citizenry fully dependent on the government for financial handouts, medical intervention, protection and sustenance.

Unless we find some way to rein in the government's power grabs, the fall-out will be epic.

Everything I have warned about for years—government overreach, invasive surveillance, martial law, abuse of powers, militarized police, weaponized technology used to track and control the citizenry, and so on—has coalesced into this present moment.

The government's shameless exploitation of past national emergencies for its own nefarious purposes pales in comparison to what is presently unfolding.

Deploying the same strategy it used with 9/11 to acquire greater powers under the USA Patriot Act, the police state—a.k.a. the shadow government, a.k.a. the Deep State—has been anticipating this moment for years, quietly assembling a wish list of lockdown powers that could be trotted out and approved at a moment's notice.

It should surprise no one, then, that the Trump Administration has asked Congress to allow it to suspend parts of the Constitution whenever it deems it necessary during this coronavirus pandemic and "other" emergencies.

In fact, the Department of Justice (DOJ) has been quietly trotting out and testing a long laundry list of terrifying powers that override the Constitution.

We're talking about lockdown powers (at both the federal and state level): the ability to suspend the Constitution, indefinitely detain American citizens, bypass the courts, quarantine whole communities or segments of the population, override the First Amendment by outlawing religious gatherings and assemblies of more than a few people, shut down entire industries and manipulate the economy, muzzle dissidents, "stop and seize any plane, train or automobile to stymie the spread of contagious disease," reshape financial markets, create a digital currency (and thus further restrict the use of cash), determine who should live or die…

You're getting the picture now, right?

These are powers the police state would desperately like to make permanent.

Both signify a clear violation of every right espoused in the Constitution, including habeas corpus.

Habeas corpus, a fundamental tenet of English common law that guards against arbitrary and lawless state action, does not appear anywhere in the Bill of Rights. Its importance was such that it was enshrined in the Constitution itself. And it is of such magnitude that all other rights, including those in the Bill of Rights, are dependent upon it. Without habeas corpus, the significance of all other rights crumbles.

The right of habeas corpus was important to the Framers of the Constitution because they knew from personal experience what it was like to be labeled enemy combatants, imprisoned indefinitely and not given the opportunity to appear before a neutral judge. Believing that such arbitrary imprisonment is "in all ages, the favorite and most formidable instrument of tyranny," the Founders were all the more determined to protect Americans from such government abuses.

Translated as "you should have the body," habeas corpus is a legal action, or writ, by which those imprisoned unlawfully can seek relief from their imprisonment. Derived from English common law, habeas corpus first appeared in the Magna Carta of 1215 and is the oldest human right in the history of English-speaking civilization. The doctrine of habeas corpus stems from the requirement that a government must either charge a person or let him go free.

Panic Has Led to Government "Cures" That Are Worse than the Disease, History Shows

I am an American constitutional lawyer – and I see our government using Covid-19...