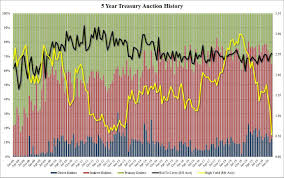 Let's start at the top: the yield on today's auction, which was 0.535%, was not only sharply below the February 1.15%, but was also below the lowest on record, which was recorded in July 2012 when it hit 0.58%. The auction also stopped through the When Issued by 1.5bps, showing demand coming into the auction was quite high despite today's torrid risk rally.

What You Should Know About 5G Satellites...

Here's How You Can 3D-Print Masks At Home