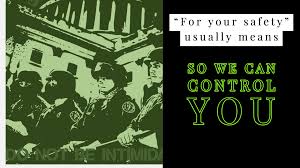 There was a good reason why our American ancestors failed to include an emergency exception in the Bill of Rights. It was because they knew that throughout history emergencies have been the time-honored way by which people lose their liberty. Thus, the First Amendment does not say:

Congress shall make no law respecting an establishment of religion, or prohibiting the free exercise thereof; or abridging the freedom of speech, or of the press; or the right of the people peaceably to assemble, and to petition the government for a redress of grievances, except in cases of emergency.

The Second Amendment does not state:

A well-regulated militia, being necessary to the security of a free state, the right of the people to keep and bear arms, shall not be infringed, except in cases of emergency.

The Fifth Amendment does not state:

No person shall … be deprived of life, liberty, or property, without due process of law, except in cases of emergency.

The Sixth Amendment does not state:

In all criminal prosecutions, the accused shall enjoy the right to a speedy and public trial, except in cases of emergencies.

The Constitution does not state:

The privilege of the Writ of Habeas Corpus shall not be suspended, unless when in Cases of Rebellion or Invasion the public Safety may require it, except in cases of emergencies.

Why didn't the Framers and our ancestors include an emergency exception in the Constitution and the Bill of Rights?

Because they knew that such an exception would nullify all the restrictions in the Bill of Rights and the limitations on power enumerated in the Constitution.

That is, they knew that if they included an emergency exception, then they might as well have just called into existence a federal government with the omnipotent, totalitarian power to destroy their rights and liberties.

The Framers and our ancestors understood that emergencies and crises have been the time-honored way throughout history by which people have lost their liberties and their well-being at the hands of their own government.

Now We Know How Germany Let It Happen