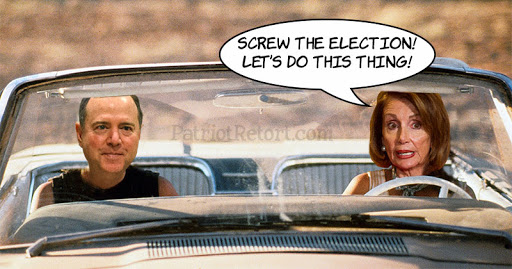 "Thank you. Thank you America, greatest country in the world," says Donald Trump, saluting Lee Greenwood as the Country singer winds up his famous anthem. "Didn't take quite as long, this time, did it? No, no, it's been a hard road and I appreciate the work of all those who have been out there working to make this happen. And I am especially humbled and appreciative of all those who braved the abuse and went to the polls ansd voted to Keep America Great.

"But before I go on, I want to bring up here on stage with us tonight a woman who may be a little bit of a surprise to you, the woman who — second only to our lovely First Lady, we can't forget her — the woman who as much as anyone else on our team helped to make this victory possible.

"You know, when I first asked if we couldn't find some way to drive the Democrat Party off the cliff — someone who was willing to work with us to discredit Bernie and Sandy's new Democrat Socialist Party so completely that they wouldn't be able to come back and destroy all our good work after 2024, to help us guarantee no Democrat would win national office again for 20 years — it was pretty much just a daydream, just an offhand thought.