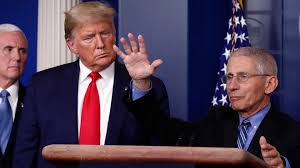 When reporters noted Dr. Fauci's absence during Monday's briefing, the administration had a plausible explanation: he did an interview with Fox News's Sean Hannity a short time later. But the doctor's continued absence on Tuesday made some nervous, especailly after he had contradicted Trump's rosy pronouncements, especially Trump's insistence that the US get 'back to work' by Easter (though Trump clarified during last night's briefing that only states with low case numbers should return to work).

But just as the administration suggested, Dr. Fauci reappeared on Wednesday, and, more importantly, continued to disagree with President Trump.

And as the NYT continues to publish more anonymously-sourced reports about the administration continuing to "sideline" Dr. Fauci (though, to be fair, at this point, the disconnect between what Trump has been saying and what the administration has been doing is noticeably wide).

There's been a lot of anonymously sourced trash talk, though some have speculated that Trump is simply trying to present a more optimistic tone while leaving the doctors and Congress to deal with the more unpleasant realities of the situation.

Trump administration declares it will no longer treat China with kid gloves...