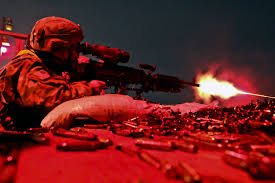 Notice, first of all, an important phenomenon: No nation-state is invading and trying to conquer the United States. There is no flotilla composed of hundreds of thousands of military transport ships crossing the Atlantic or the Pacific oceans carrying millions of invading soldiers. There is also no massive air force consisting of bombers, fighter planes, and transport planes heading towards us from across the oceans.

In fact, no nation-state on earth has the remotest capability of invading and conquering the United States. For one thing, every nation state is in worse financial straits than the U.S. government. Even if one or more of them wanted to amass a military force to cross the ocean and invade and conquer the United States, they wouldn't have the money, much less the armaments, supplies, weaponry, planes, tanks, and other tools of warfare, to do it.

Let's not forget, after all, that Hitler's army was unable to successfully cross the English Channel, which is much more narrow than the Atlantic and Pacific oceans, and invade and conquer England.

Indeed, even if some nation state, including China, Russia, Iran, North Korea, Syria, or Vietnam, were able to cross the ocean and send troops onto American beaches, how would they sustain their supply lines? As soon as those troops headed inland, if they even got that far, they would quickly run out of ammunition and other essentials.