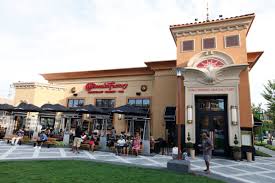 CALIFORNIA – The Cheesecake Factory, one of the most popular sit-down restaurant chains in the country, says it will not be able to make upcoming rent payments for any of its storefronts on April 1 because of significant loss of income due to the coronavirus crisis.

[…]  Company chairman and CEO David Overton writes, "Due to these extraordinary events, I am asking for your patience, and frankly, your help." He continues, "we appreciate our landlords' understanding given the exigency of the current situation." The letter says that the company hopes to resume paying rent as soon as possible.

[…]  The Cheesecake Factory was founded in Beverly Hills in 1972 and maintains its original location on Beverly Drive, with 39 locations in California. In total, it operates 294 restaurants in 39 states, plus the District of Columbia, Puerto Rico, and Toronto, Canada. In 2019, the company also acquired Phoenix-based Fox Restaurants, including North Italia, Flower Child, and The Henry. Most of the company's landlords are malls, including Simon and Westfield.  (read more)

This is one small example; however, it is an opportunity to imagine the beginning of a process were Blue team corporations start to tell Red team financiers they are refusing to pay their debts.

Los Angeles Mayor Garcetti Announces Water and Power Will Be Shut Off for Non-Essential...

Journalism Needs a Stimulus. Here's What it Should Look Like

47,000 Stores Shutter Across The US As Virtually All Retailers Stop Paying Rent

A Litany of Useless Laws Have Been Exposed By the Coronavirus

Ingraham: Starve the virus, not the economy