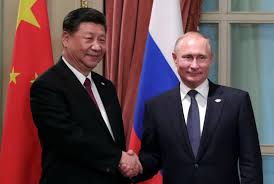 Sinister forces in American political life are using the crisis to incite war with China and to stir up bad feelings towards the Chinese people. The Chinese people are in fact heroic. They are our friends, not our enemies. But the forces of evil want you to think otherwise."

I don't know if Washington would consider or China would be interested in providing medical protective gear and respirators to America, given recent statements by President Trump and Secretary of State Pompeo. But even if the Chinese government is "authoritarian," certainly, as I and others have written recently, America too has an authoritarian bent as well.

As is documented both on China's CGTN channel on YouTube, and on RT, both nations are helping, especially in the case of Serbia whose request for EU aid was refused. Today, as I write these words, is the anniversary of the NATO bombing campaign on Serbia. From the article:

"Twenty-one years ago, NATO, without obtaining permission to intervene from the United Nations, launched armed aggression against Serbia, thus crudely violating the UN Declaration, the Helsinki Accords, a number of other international conventions and its own act on the creation of NATO of 1949," the statement runs. "It has been and will remain a crime against peace and humanity. The act of aggression, committed in alliance with the terrorist Kosovo Liberation Army, left an estimated 3,500-4,000 people dead and 12,500 others injured and caused tremendous economic damage. The use of depleted uranium rounds and other prohibited weapons was a long-term hazard to the people and the environment. NATO turned itself into an aggressive, interventionist alliance with an outspokenly expansionist policy targeting the East first and foremost."