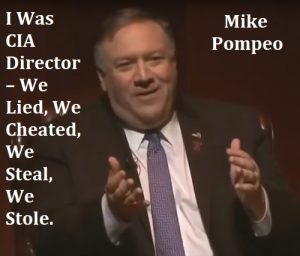 UN Secretary General Antonio Guterres has called for an "immediate global ceasefire" to focus on fighting Covid-19. He has appealed for the "waiving of sanctions that can undermine countries' capacity to respond to the pandemic."

But Washington is not listening.

Requests from Venezuela and Iran for emergency IMF loans to buy medical supplies were blocked by U.S. interventions.

Just a month ago Pompeo announced an increase of sanctions against Iran. The sanctions block money transfers. They make it impossible for Iran to import the medical equipment it urgently needs to counter the epidemic.

While the U.S. renewed the sanction waiver which allows Iraq to import electricity and gas from Iran the waiver is now limited to only 30 days. One third of Iraq's electricity depends on those imports from Iran and, if the waiver is not renewed, its hospitals will go dark just when the epidemic will reach its zenith.

Parts of the Trump administration are even pressing for a wider war against alleged Iranian proxy forces in Iraq:

The Pentagon has ordered military commanders to plan for an escalation of American combat in Iraq, issuing a directive last week to prepare a campaign to destroy an Iranian-backed militia group that has threatened more attacks against American troops.