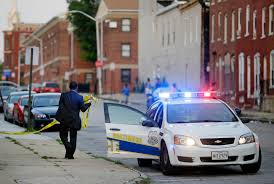 The Baltimore Sun, citing new US Census data released on Thursday, estimates that the population in the city was 593,490 as of July 2019.

We've mentioned on several occasions how deindustrialization, "white flight" of the 1960/70s, the crack epidemic of the 1980/90s, and now the murder and opioid crisis has created another mass exodus, with many people fleeing for Baltimore County and other surrounding counties.

Michael Rendall, director of the Maryland Population Research Center and a sociology professor at the University of Maryland, College Park, said after the 2015 Baltimore Riots, no other counties surrounding the city saw a fall in population.

The city's plunging population, Rendall said, "is not a phenomenon reflective of the overall metropolitan area."

Over the previous year, Baltimore City lost 8,953 people, or 1.5% of its population.