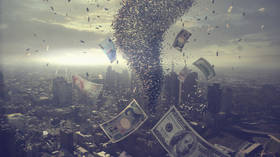 The Dow Jones Industrial Average dropped 100 points at the opening, before recovering some of its losses. The S&P 500 and the Nasdaq Composite were trading flat. The main US indices were gaining in pre-market trading before the job numbers were announced.

The Labor Department reported on Thursday that the number of last week's jobless claims has doubled from the previous week's historic record, bringing the total number of Americans who filed for unemployment over the past two weeks to 10 million.

The surge in unemployment is far greater than expected by economists who have characterized it as "monstrous," "stunningly awful," and "a portrait of disaster." US jobless claims were hovering in the low 200,000s each week preceding the Covid-19 outbreak.

"The news is terrible and I'm not sure why the estimates the past two weeks have been so far off but we all know how rough things are," Peter Boockvar, chief investment officer at Bleakley Advisory Group, was cited as saying by CNBC. "The only question it seems is timing. The timing of when that freaking curve bends and when we as a society decide to shift to a life resumption plan, masks included."