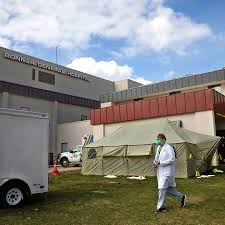 The meeting, which appeared to violate orders by Gov. Brad Little of Idaho to avoid group gatherings, was an assertion of what Mr. Bundy said was a constitutional right to peacefully assemble. But Mr. Bundy said he also hoped to create a network of people ready to come to the aid of those facing closure of their businesses or other interference from the government as a result of the coronavirus outbreak.

"If it gets bad enough, and our rights are infringed upon enough, we can physically stand in defense in whatever way we need to," Mr. Bundy told the meeting. "But we hope we don't have to get there."

In a state with pockets of deep wariness about both big government and mainstream medicine, the sweeping restrictions aimed at containing the spread of the virus have run into outright rebellion in some parts of Idaho, which is facing its own worrying spike in coronavirus cases.

The opposition is coming not only from people like Mr. Bundy, whose armed takeover of the Oregon refuge with dozens of other men and women in 2016 led to a 41-day standoff, but also from some state lawmakers and a county sheriff who are calling the governor's statewide stay-at-home order an infringement on individual liberties.