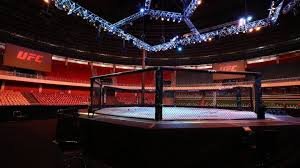 Even as most sporting events have ground to a halt worldwide because of the highly contagious virus, Dana White, the U.F.C. president, has insisted he can safely hold mixed martial arts events.

"This place where this fight is going to be on April 18 I have locked up for two months, so I'm going to continue to pump fights out," White told ESPN on Monday, though he declined to say exactly where.

The location will be the Tachi Palace Casino Resort near Lemoore, Calif., about 40 miles south of Fresno, according to the people, who spoke on condition of anonymity because White had not announced the venue. The casino, which closed the night of March 20 because of the pandemic, is on land belonging to the Tachi-Yokut Tribe, part of the federally recognized Santa Rosa Indian Community.

The U.F.C. postponed three events in March and April as stay-at-home orders became increasingly widespread and states began requiring nonessential workers to stay home. Nevada, where the U.F.C. is based, is under a statewide stay-at-home order until at least April 30 — it has even shut down the Las Vegas casino industry.