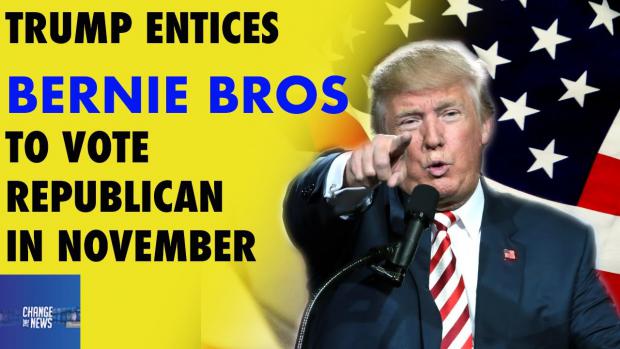 Today Luke and Time jump into the breaking news that Bernie Sanders has suspended his bid for the 2020 presidential election. Luke reminds viewers that Sanders championed progressive radical ideas like free college, ending wars, criminal justice reform, and free healthcare - which many college students were receptive to.

In light of the news, Trump is enticing Bernie Bros to join the Republican party and vote for him, but will it work? Has Trump sealed the 2020 election? Not yet!

The guys remind viewers that things develop quickly in the political space, and it is only April. Many Dems voted for Trump in 2016 thinking he was the anarchy vote, and he would cause the system to implode, but will they vote for him again in 2020? Time will tell.

For now, Trump has not won this yet. Looks like he could, but that could change at any minute. The number one indicator of if an incumbent president will win is the stock market. If it's not at ATH, he's unlikely to win. But that all depends on who the opposing candidate is. If it's Cuomo, he could win.

Regardless, Trump is in a hard position because he'll be blamed no matter what.

Stay tuned for more from Change The News.

Dr. Daniel Neides wrote a highly viewed column that suggested a link between vaccines and autism

Dr. Plotkin speaks under oath about the escalating levels of aluminum included in every vaccine