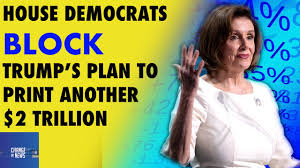 In today's economic news, President Donald Trump proposed ANOTHER $2 Trillion bill to bring jobs and stimulate the economy. Yet many democrats - like Nancy Pelosi and Chuck Schumer - oppose the bill because it's too progressive.

As we've been saying for months, the government overreach and economic effects of locking down the world economy are potentially far worse than the effects of the sickness itself.

Nearly 1/3 renters in the US, didn't pay rent in April. Request to forgive mortgages is also up, so the real estate market will certainly be affected as people race to sell their homes in the coming months.

In the end, the guys suggest that it may be time to start using an alternate currency, one not issued by the government or central banks. But what could that be?

At times like this, we urge everyone to practice radical self-reliance. You cannot count on your employers, your government, or anyone else to take care of you. You must plan and care for yourself.

Always practice love and kindness with each other, and we wish you a beautiful day. Thanks for tuning in to Change The News.

The Powers of the Mind- Ronnie McMullen