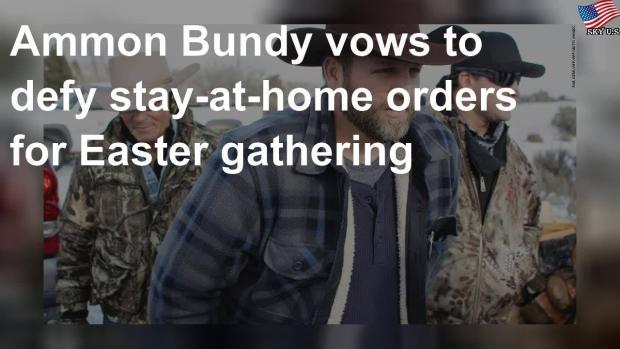 (CNN)Ammon Bundy, the rancher who led an armed occupation of a federal wildlife refuge in Oregon, said he plans on holding an Easter gathering despite stay-at-home orders implemented during the coronavirus pandemic.

Bundy told CNN he wants to gather several hundred people in Idaho at a yet-to-be-announced location. He said he believes it's his constitutional right to assemble, even as state and local officials urge people to socially distance to avoid spreading the virus further.

"Our goal is to get enough people together and secure our rights... we are not trying to provoke, we want people to be able to worship," Bundy said in a phone interview.

Ammon Bundy makes his way from the entrance of the Malheur National Wildlife Refuge Headquarters in Burns, Oregon on January 6, 2016. Rob Kerr/AFP/Getty Images

Idaho is one of the 42 states that have implemented a stay-at-home order aimed at stopping the spread of coronavirus. Gov. Brad Little put the order into effect on March 25 and it is due to expire on April 15, although he said Thursday he's unlikely to lift it before the end of the month.

As of Thursday evening, Idaho had at least 1,354 confirmed coronavirus cases and 24 coronavirus-related deaths, according to data from John Hopkins University.