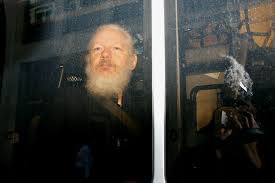 Magistrate Vanessa Baraitser had just made a ruling that the names of Julian Assange's partner and young children could be published, which she stated was in the interests of "open justice". His partner had submitted a letter in support of his Covid 19 related bail application (which Baraitser had summarily dismissed) to state he had a family to live with in London. Baraitser said that it was therefore in the interests of open justice that the family's names be made public, and said that the defence had not convincingly shown this would cause any threat to their security or well-being. It was at this point Sommers barely kept control. He leapt to his feet and gave notice of an appeal to the High Court, asking for a 14 day stay. Baraitser granted four days, until 4pm on Friday.

There have been two Covid-19 deaths in Belmarsh prison so far. For obvious reasons the disease is ripping through the jail like wildfire. The Department of Justice is admitting to one death, and refuses to give statistics for the number of cases. As even very sick prisoners are not being tested, the figures would arguably not mean much anyway. As the court heard at the bail application, over 150 Belmarsh prison staff are off work self-isolating and the prison is scarcely functioning. It is the most complete definition of lockdown.