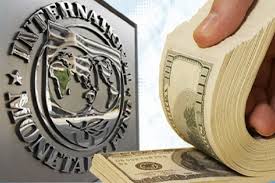 The Washington-based organization now expects the global economy to contract by 3% in 2020. By contrast, in January it had forecast a global GDP (gross domestic product) expansion of 3.3% for this year.

"It is very likely that this year the global economy will experience its worst recession since the Great Depression, surpassing that seen during the global financial crisis a decade ago," Gita Gopinath, the IMF's chief economist, said in the latest World Economic Outlook report.

In January, the IMF had estimated 3.4% growth for global GDP in 2021; this has now been revised up to 5.8% (although growth is expected to be coming from a lower base following 2020′s projected contraction).

Speaking to CNBC Tuesday, Gopinath said: "This is a crisis where the economic shock is something that is not exactly controlled by economic policy," as it's unclear when the pandemic will end.

The IMF's chief economist also said that in comparison to the Great Depression, "we are (now) better off on the health front. On the economic front, I think it makes a big difference that there are lenders of last resort, that monetary policy is proactively able to come in and ensure enough liquidity in markets, that fiscal policy is able to play a major role in supporting firms and households."