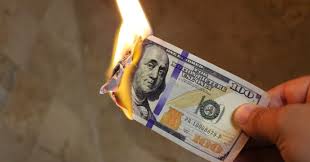 A custom Bloomberg index measuring M2 figures for 12 major economies including the U.S., China, euro zone and Japan shows their aggregate money supply had already more than doubled to $80 trillion from before the 2008-2009 financial crisis.

These numbers are so large that they no longer have any meaning; they are simply abstractions. It's been some time since people thought about the concept of money and its purpose. The broad idea is that money has value, but that value is not arbitrary. Former Fed Chairman Paul Volcker once said in an interview that "it is a governmental responsibility to maintain the value of the currency they issue. And when they fail to do that, it is something that undermines an essential trust in government."

The dollar has no real intrinsic value, backed only by the full faith and credit of the U.S. government. Under a fiat currency system, the government says that a dollar is a dollar. Its value relative to things such as other currencies and gold is determined on global markets. Gold is considered to be an objective store of value, and the metal's rise in dollar terms can be expressed another way, which is that the dollar fell in gold terms. That implies the market has rendered a decision on the value, or rather, the purchasing power of the dollar.