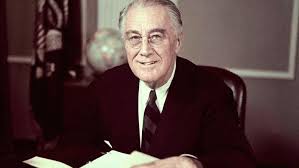 A 2019 survey of historians ranked FDR as the third greatest president. President George H.W. Bush praised him for having "brilliantly enunciated the 20th-century vision of our Founding Fathers' commitment to individual liberty."

Roosevelt did often invoke freedom, but almost always as a pretext to increase government power. FDR proclaimed in 1933: "We have all suffered in the past from individualism run wild." Naturally, the corrective was to allow government to run wild.

FDR declared in his first inaugural address: "We now realize… that if we are to go forward, we must move as a trained and loyal army willing to sacrifice for the good of a common discipline, because without such discipline no progress is made, no leadership can become effective." The military metaphors, which practically called for the entire populace to march in lockstep, were similar to rhetoric used by European dictators at the time.

Roosevelt declared in a 1934 fireside chat: "I am not for a return of that definition of liberty under which for many years a free people were being gradually regimented into the service of the privileged few." Politicians like FDR began by telling people that control of their own lives was a mirage; thus, they lost nothing when government took over. In his re-nomination acceptance speech at the 1936 Democratic Party convention, Roosevelt declared that "the privileged princes of these new economic dynasties . . . created a new despotism.

Early American Militias: The Forgotten History of Freedmen Militias from 1776 until the Civil War