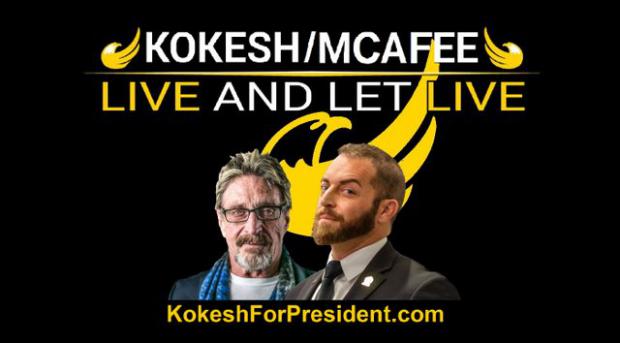 "I am happy to join forces with Adam in my bid for the Vice-presidential slot within the Libertarian Party. Adam's platform is close to my own and I fully endorse it. Even though I am continuing my bid for President, if Adam wins I will be happy to fully support him as his running mate." -John McAfee

This is a very exciting partnership and it's just the beginning. Localization is the solution to the statist paradigm that is destroying our society.

John McAfee is well known in the libertarian community, large in part from his antics and eccentricities. What some people might forget is that McAfee is a very savvy businessman and an accomplished entrepreneur and pioneer of technology.

With John's support, I know that I can garner support from people that would typically be outside my reach. I often boast about having the largest social media following in the race, well John actually beats me by a long shot.

Vermin and myself have over 7x more followers on twitter than our closest competitor and John beats us both by over a MILLION!

John's social media presence is just the tip of the iceberg as to why he would make an excellent running mate. I'm so glad to have him on Team #EndTheFed.

I understand if money is tight during the Coronaphobia shutdown, but if you can support us with a contribution, it will really help us secure the nomination.


We need to make sure that the nominee is not only somebody with a principled and pragmatic plan, but somebody who has a proven track record of leveraging media and reaching far outside the echo chamber.


You can help me secure the nomination by donating to the campaign HERE.