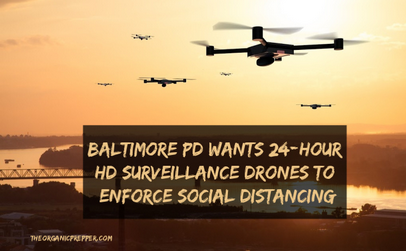 The Baltimore Police Department and "Persistent Surveillance," an Ohio-based company, signed a deal together to spy on the residents of Baltimore, Maryland with drones. In Nazi Germany, fascism was characterized by the fusion between corporate and government power.

This shady company was under fire almost 4 years ago in 2016, for doing surveillance with the Baltimore Police Department and violating their own 45-day data retention policy.

Give an inch, they take a mile. Their client, the BPD was able to violate their official policy with impunity. "All media will be stored in a secure area with access restricted to authorized persons," states the official policy of Persistent Surveillance Systems. "Recordings not otherwise needed for criminal evidence or for official reasons are retained for a period of 45 days and then destroyed."

The company used drones to collect over 300 hours of aerial surveillance footage over Baltimore throughout 8 months in 2016.

This was directly after nationwide scrutiny came to the department in the aftermath of the death of Freddie Gray, which sparked nationwide protests.

City officials approved the new deal on April 1, and then the ACLU filed a lawsuit against the Baltimore Police Department about a week and a half later on April 9.

How invasive is surveillance in Baltimore?

The drones will be equipped with high-resolution cameras, capable of posing a real threat to the security of anyone deemed a "criminal."

The ACLU emphasized that this crosses a massive line, explaining that the plan places every resident of Baltimore "under constant aerial surveillance."

"It is equivalent to having a police officer follow us, each of us, outside all the time in case we might commit a crime," senior staff attorney for the ACLU of Maryland, David Rocah said. "If that happened in real life, everyone would clearly understand the privacy and First Amendment implications, and it would never be tolerated."

The high definition surveillance drones can reportedly cover around 90% of the City of Baltimore's land area at any particular moment.

The ACLU noted that in combination with cameras on the ground accessed by the Baltimore Police Department, license plate readers, and other sources of info, it can all be combined to provide detailed information about the actions, identities, whatever you can think of, in regard to residents.

Representing the philosophical split between the fundamentally opposed sides of totalitarian vs not totalitarian, a Baltimore Police Commissioner admitted the police will in fact combine the data and have massively increased power.