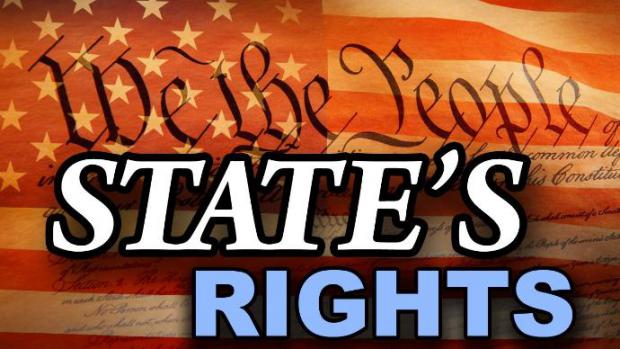 It must be confusing to be a "progressive" these days.

They criticize Trump's lack of dictatorial control over the country to stop the CoronaVirus. He left the lockdowns to the state governments.

But then Trump suggests that the Feds will make the call on when to reopen the economy (AKA give people their rights back).

And just like that, the Tenth Amendment was reborn.

Suddenly, the radical left loves the Constitution! Specifically the part of the Bill of Rights that says:

The powers not delegated to the United States by the Constitution, nor prohibited by it to the States, are reserved to the States respectively, or to the people.

Trump has done more for states' rights than any other President in modern history. Not because he is trying to. Because he is universally hated by the left. And the lefties were the ones lagging behind on understanding why state governments are an important check on federal power.

But Trump has strengthened the argument for state power on the right as well. I mean we're looking at a $4 trillion deficit in the Federal budget this year alone! It took Obama four years to rack up that kind of debt.

Ignoring the Trump fanatics, grounded people understand that this massive spending comes with a real price tag. It means the dollar, and the federal government will lose its power as the currency is devalued.

The feds have long held money over the states as bribes to do their bidding where the control was not strictly legal. For instance, highway funds in exchange for each state raising the drinking age to 21.

When that leverage is gone, and when the Feds can only pay their enforcers with worthless paper, it is logical to think the states will pick up the pieces, reject federal authority, and go their own ways.

This whole situation was brewing under the surface before. But the CoronaVirus is the trigger that could shift it into overdrive. And now, states look like they aren't going to wait for a dollar collapse to make their moves.

For instance, the tiniest state, Rhode Island, has gone full Gestapo and is searching for New Yorkers who entered the state without quarantining. My parents live in Massachusetts, and my dad planned to sail his new boat down to Rhode Island to park it there. But that won't be happening during this pandemic. Rhode Island is closed to outsiders.