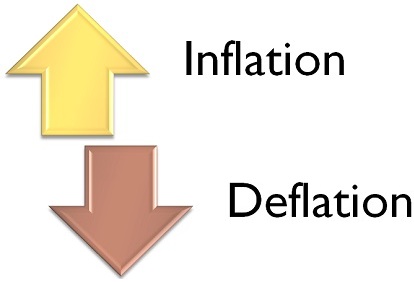 Depending on which they choose, we will have a depression characterized by deflation or by hyperinflation.

This is the 1929-style depression, where huge amounts of inflationary credit are wiped out through bank failures, bond defaults, and stock and real-estate crashes.

Before 1913 (the inception of both the Federal Reserve and the income tax), having the dollar pegged to gold (at $20 an ounce) inhibited the scale of monetization.

When depressions of this type occurred, depositors acted quickly to collect their money; they had no illusion that the government would bolster their banks; once the banks ran out of gold, their bank accounts were worthless.

Their quick response and the fact that the federal government could not monetize its deficit spending as freely as it now can forced the market to correct distortions rapidly.

Until the 1930s, depressions were sharp but brief.

They were short because unemployed workers and distressed business owners were forced to lower their prices and change their business methods to avoid starvation.

The 1929 Depression was deeper and more widespread than any before it since the Federal Reserve (by becoming the lender of last resort) allowed banks to maintain far smaller reserves than ever before.

By backing the dollar with Reserve Bank IOUs instead of gold, the money supply could be increased enormously, and large distortions could be built into the economy before a depression liquidated them.

It was far longer than those before it, because government attempted to hold wages and prices at levels few could afford to pay, while its make-work and income-redistribution schemes retarded the rebuilding of capital and the productive employment of labor.

Meanwhile, the government discovered the freedom with which it could have its deficit spending monetized and proceeded to spend at an unprecedented rate to finance the New Deal's spending programs and World War II.

Since the end of the last depression, there have been numerous small recessions. Since at least the '70s, anyone of them could have snowballed into another 1929-style deflation.