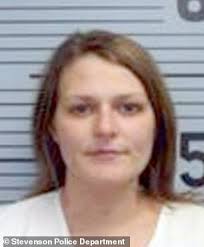 The Alabama woman who claims she acted in self-defense when she fatally shot her alleged rapist has lost her appeal based on the state's Stand Your Ground law in her murder case.

Brittany Smith, 32, was denied her appeal seeking immunity from prosecution and the dismissal of her case in an unanimous decision by the Alabama Court of Criminal Appeals on Thursday, according to AL.com.

Smith claims she was brutally raped and beaten by Todd Smith (no relation) at her home in Stevenson, Alabama, in January 2018.

She says she shot Todd dead as he choked her brother, Chris McCallie - but her claim of self defense was denied in court.

Now her case is likely headed to trial where she faces a life in prison sentence.

Smith had filed to drop the charges under Alabama's Stand Your Ground Law which states that one may use physical force against another in the name of defense and to defend a third person from unlawful force.

In February this year Jackson County Judge Jenifer Holt declined to dismiss Brittany's murder charges and said Brittany failed to show how she could be granted immunity for killing Smith.