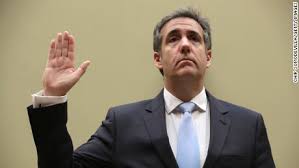 Michael Cohen, President Trump's former personal attorney who has served less than a year of his three-year prison sentence for financial crimes, will be freed because of the coronavirus outbreak, it was reported on Thursday.

The US Bureau of Prisons informed Cohen that he will be released from the Federal Correctional Institution in Otisville, New York, and allowed to serve out the remainder of his sentence in home confinement.

As of Thursday, 14 inmates and seven staffers at the complex have tested positive for coronavirus, according to CNN.

Before his release, Cohen will be required to stay in a two-week quarantine on the prison grounds.

Cohen was told on Thursday that his release is pending. He was originally scheduled to remain behind bars until his release date in November 2021.

The federal prison system has recently been freeing older, more vulnerable inmates as well as those convicted of nonviolent crimes due to the ongoing pandemic.

Cohen, who once said he would 'take a bullet' for Trump, was sentenced to three years in prison in 2018 for directing hush payments to pornographic film star Stormy Daniels and former Playboy model Karen McDougal, who claimed they had affairs with Trump.