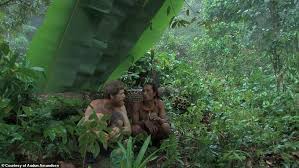 'I learned how to just be and follow the rhythm of nature,' Audun Amundsen says, reflecting on his life off-grid in the jungle with the Mentawai tribe, where there was little on the daily agenda other than making arrows or canoes and hunting for food such as monkeys, bats or shrimp.

The Norwegian engineer and filmmaker first went to live with the tribe deep in the undergrowth of western Indonesia as a 24-year-old, for a month in 2004. He returned in 2009 - this time for a three-year stay, during which time he would learn their unwritten language.

He says that the biggest thing he missed living in isolation was 'the convenience of modern society' and 'eating food for pleasure, and not simply for survival'. Having conversations with people he could relate to was another thing he yearned for at times.

Life in the wild was a life far removed from the one Amundsen had left behind.

In 2004 he quit his lucrative job working on an oil rig off the Scottish coast and left his modern, comfortable apartment in Trondheim, Norway, to satisfy his itch for travel.