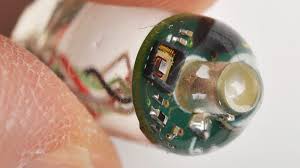 A tiny new sensor that can be worn in items of clothing could offer a new way to tap into these signals, and alert the user when it might be time to head for a checkup.

Developed by scientists at Georgia Institute of Technology, the new sensor is smaller than a ladybug and in part, mimics the function of an electrocardiogram. These are tests that rely on electrode patches attached to the skin to record the electrical activity of the heart, in turn revealing its rhythm, the flow of blood and other key metrics of the organ's health.

"Right now, medicine looks to electrocardiograms for information on the heart, but electrocardiograms only measure electrical impulses," says Farrokh Ayazi, Professor in Georgia Tech's School of Electrical and Computer Engineering. "The heart is a mechanical system with muscles pumping and valves opening and shutting, and it sends out a signature of sounds and motions, which an electrocardiogram does not detect. Electrocardiograms also say nothing about lung function."

Ayazi led a team in developing a new sensor that can fill in these blanks. It consists of two very fine layers of silicon with an incredibly narrow space in between that measures just 270 nanometers, or around 0.005 the width of a human hair. These silicon layers act as electrodes, carrying a minute voltage that moves into a state of flux in response to different sounds and vibrations from the body. According to the researchers, the device is capable to separating these from ambient sounds originating from outside the body, and convert them into readable electronic outputs to offer insights into the user's health.