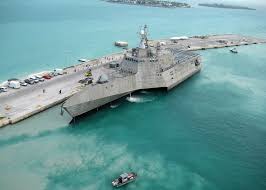 Faller said that the US continues to want to oust Maduro through "economic and diplomatic pressure," and not military force, though other officials have said the US would not rule out the use of military force to do so.

As the AP writes:

"This is not a shift in U.S. government policy," said Faller, who nonetheless celebrated that enhanced interdiction efforts would hurt Maduro's finances and staying power. "It's not an indication of some sort of new militarization in the Caribbean."

The deployment announced this month is one of the largest U.S. military operations in the region since the 1989 invasion of Panama to remove Gen. Manuel Noriega from power and bring him to the U.S. to face drug charges. It involves assets like Navy warships, AWACS surveillance aircraft and on-ground special forces seldom seen before in the region.

When the US started this latest buildup in the Caribbean, it was done nominally to fight drugs, and came immediately after the US put a bounty on Maduro accusing him of drug smuggling. Attorney General Barr created the legal basis for this.