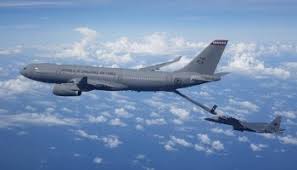 The Airbus A3R system is being developed for installation in the Airbus Multi-Role Tanker Transport (MRTT) aircraft, which is based on the civilian Airbus A330. The recent tests covered all aspects of the aerial refueling process leading up to the certification phase of the program set to begin at the start of next year.

According to Airbus, the A3R system is designed, when fully developed, to take over the entire refueling process, with the Air Refueling Operator (ARO) only needing to supervise the operation. All the ARO needs to do is activate the system and the A3R takes control of the refueling boom, flying it to within centimeters of the receiver while maintaining the proper angle and a safe distance. Once in the proper alignment, the system extends the telescopic beam from the boom tip into the receiver, transfers the fuel, disconnects, and flies the boom away to a safe distance to allow the receiving plane to get clear. No additional equipment needs to be installed on the receiver aircraft to work with the A3R system.