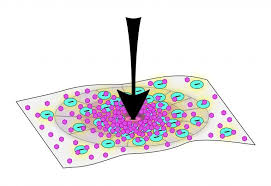 Scientists at Johns Hopkins University have succeeded in replicating this adaptive mineralization process in the lab, showing off a new type of material that alters its stiffness as more force is applied.

Human bone is one example of a natural material that is able to regulate its own structural makeup, adding minerals from the surrounding blood via cellular signaling. Coral reefs can work in similar ways, upping the mineralization in areas that may be subjected to the greatest ocean forces as a means of survival.

The Johns Hopkins researchers set out to develop a material that could work in a similar way, bringing in additional minerals as a response to extra stress. This began with polymer films that can translate mechanical forces into electrical charges, which are proportional to the amount of stress they endure.

These films were then placed in a fluid made to mimic ionic concentrations of blood plasma. The idea was that the varying electrical charges could act as signals, just like those used by bone to call in reinforcements, and cause minerals to form on the surface.