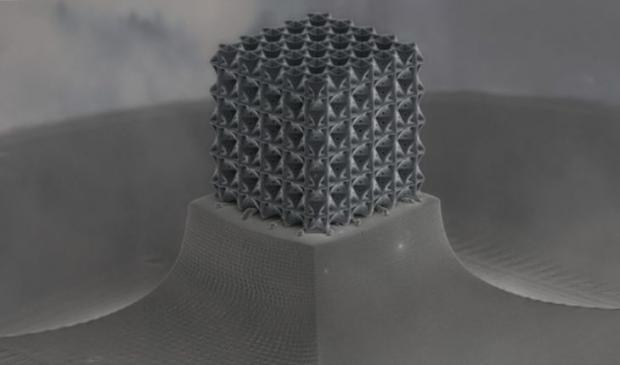 The team's design has been shown to improve on the average performance of cylindrical beam-based architectures by up to 639 percent in strength and 522 percent in rigidity.

They designed and fabricating the material, which consists of closely connected, closed-cell plates instead of the cylindrical trusses common in such structures over the past few decades.

They used complex 3D laser printing process called two-photon polymerization direct laser writing. The laser is focused inside a droplet of an ultraviolet-light-sensitive liquid resin, the material becomes a solid polymer where molecules are simultaneously hit by two photons. By scanning the laser or moving the stage in three dimensions, the technique is able to render periodic arrangements of cells, each consisting of assemblies of plates as thin as 160 nanometers.

An important innovation was to include tiny holes in the plates that could be used to remove excess resin from the finished material. As a final step, the lattices go through pyrolysis, in which they're heated to 900 degrees Celsius in a vacuum for one hour. According to Bauer, the end result is a cube-shaped lattice of glassy carbon that has the highest strength scientists ever thought possible for such a porous material.