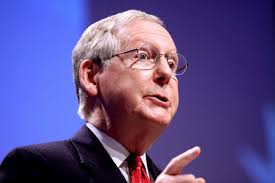 "I would certainly be in favor of allowing states to use the bankruptcy route," he said Wednesday in a response to a question on the syndicated Hugh Hewitt radio show. "It's saved some cities, and there's no good reason for it not to be available."

The host cited California, Illinois and Connecticut as states that had given too much to public employee unions, and McConnell said he was reluctant to take on more debt for any rescue.

"You raised yourself the important issue of what states have done, many of them have done to themselves with their pension programs," he said. "There's not going to be any desire on the Republican side to bail out state pensions by borrowing money from future generations."

His statements set up a conflict with House Speaker Nancy Pelosi, who said on Bloomberg Television Wednesday a "major package" of aid for state and local government will be in the next stimulus legislation considered by Congress.

Enemies, a Love Story: Inside the 36-year Biden and McConnell Relationship