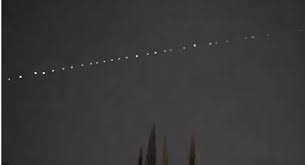 As of 3 April 2020, SpaceX has 358 satellites of the constellation in orbit. There are about 300 full production Starlink satellites. SpaceX is targeting service in the Northern U.S. and Canada by late 2020. SpaceX is launching 60 satellites at a time, aiming to deploy more than 1,500 of the quarter-ton spacecraft to provide near-global service by late 2021 or 2022.

420 satellites are needed for minor broadband coverage of Earth. 780 of the first ~1600 for moderate coverage.

A launch scheduled for May would provide SpaceX with 420 satellites for minor broadband coverage.