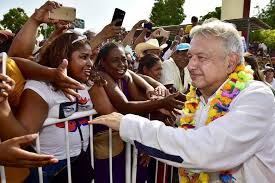 That's right. We are referring to Mr .Lopez-Gatell, Mexico's minister of health and pedigreed PhD epidemiologist from John-Hopkins and his boss, President Obrador, a true blue socialist that the Bernie Bros would wet their cargo pants over.

ALMO, as they call the latter, is not drinking the Covid Cool-Aid. His flagrant rebuke of the Yankee virus patrol has left the US left-wing media sputtering (e.g. Slate: "ALMO goes off the Rails"), suggesting that he is wallowing in self-doubt because his poll ratings have dropped from spectacular to very strong, and that in the process he is dangerously undermining his allegedly more sensible health minister.

Not so fast, however. While Lopez-Gatell has called for social distancing and other sensible measure, Mexico has not gone into anything like Lockdown Nation, and for the reasons that its health minister articulated in this morning's WSJ piece on Mexico's corono-apostasy:

Mr. López-Gatell, 51, said he estimates the virus will eventually infect roughly two-thirds of Mexicans, the level at which enough people have developed immunity that further spread becomes more difficult. Left unchecked, the virus would run its course in as little as six weeks, overwhelming the health system, he said. But with social distancing measures, it could take as long as a year or more, similar to the H1N1 influenza pandemic in 2009, which first emerged in Mexico and which Mr. Lopez-Gatell also experienced as a health official.