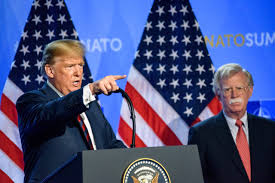 Take Admiral Craig S. Faller, commander of U.S. Southern Command (SOUTHCOM), with responsibility for all of Latin America. Just before the COVID-19 crisis shifted into full gear, on March 11 he testified before the House Armed Services Committee and admitted, "There will be an increase in the U.S. military presence in the hemisphere later this year." Naturally, admiral, but why?

Well, if one can push past the standard, mindless military dialectics — i.e. "bad guys" — the admiral posits a ready justification: Russia and (most especially) China. With his early career molded in the last, triumphalist Reagan-era Cold War, Faller may be a true believer in new dichotomies that must feel like coming home for the 1983 Naval Academy graduate. Before the committee, he described China, Russia, Iran, Cuba, and Venezuela as "malign state actors" who constitute "a vicious circle of threats." Faller is right about the circle, but it is his own country that produces it.