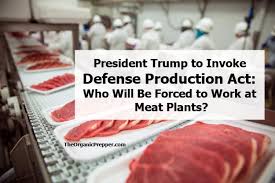 (April 28, 2020) Over the past few weeks,  nearly a dozen large meat processing plants have closed their doors due to widespread coronavirus among employees. Thousands of workers have become infected and at the time of publication, at least 20 have died.

At the same time, President Trump is invoking the Defense Production Act.

What is the Defense Production Act?

The act, which was officially passed in the 1950s, give the government power over private industries.

The Act gives the federal government broad authority to direct private companies to meet the needs of the national defense.

Over the decades, the law's powers have been understood to encompass not only times of war but also domestic emergency preparedness and recovery from terrorist attacks and natural disasters.

The act authorizes the president to require companies to prioritize government contracts and orders seen as necessary for the national defense, with the goal of ensuring that the private sector is producing enough goods needed to meet a war effort or other national emergency.

It also authorizes the president to use loans, direct purchases and other incentives to boost the production of critical goods and essential materials.

Other provisions authorize the federal government to establish voluntary agreements with private industry and to block foreign mergers and acquisitions seen as harmful to national security. (source)

Reports say that President Trump, who refers to himself as a wartime president, is invoking the act over deep concerns about our supply chain.

What does this mean?

According to Bloomberg, the President will order the facilities will remain open due to a quickly evolving breakdown of our food supply chain.

President Donald Trump plans to order meat-processing plants to remain open as the nation confronts growing food-supply disruptions from the coronavirus outbreak, a person familiar with the matter said.

Trump plans to use the Defense Production Act to order the companies to stay open as critical infrastructure, and the government will provide additional protective gear for employees as well as guidance, according to the person. (source)

This is the spirit of how the Act was designed to be used. President Truman signed it into law over concerns about supplies and equipment during the Korean war and it has subsequently been used during disasters like hurricanes and other wars. Presidents Clinton and Bush both used it to supply California utilities during an energy crisis there. It was also used in early April to compel 3M to make N95 respirators.  So its use is not unprecedented.

1 Comments in Response to Trump to Invoke Defense Production Act: Who Will Be Forced to Work at Meat Plants?

Oh, boy! Really good news. The 13th Amendment says no involuntary slavery. So, when they tell you that you have to go to, or back to work, tell them that you don't wish to. This will let them know that you are not volunteering if you work. Then, ask them if it's an order. If they say "yes," then give them an invoice in the amount that you want ($1,000,000). See if it will be worth it to them to have you work at your rates for once. After all, 13th Amendment. No involuntary slavery. Maybe you can form an informal union with all your fellow workers-to-be.