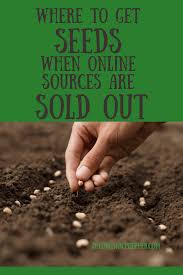 With the current shift in the economy, and with supply lines being interrupted all around the nation, there has been a massive – massive! – spike in the number of people interested in growing a garden this spring.

Hundreds of thousands – possibly millions – of new gardens are springing up across the country. Some are large, some are small, and all are important. Some people are calling them Victory Gardens, others are calling them crisis gardens. Even those living in high-rise apartments are planting "Victory Sills," pots or glasses of water on their windowsills in which herbs or sprouting vegetables are rooting. Whatever the name, cumulatively, they'll be an important source of fresh produce.

Normally the renaissance in gardening of all sorts would be nothing but good news. However, the surge of interest from both novice and experienced gardeners is stretching seed companies to the limit.  Many companies have stopped answering the phones and are putting up online pleas for understanding as they try to handle backorders with limited capacity and inventory.

Here are some other places to get seeds.

If you find yourself unable to order seeds online, here are some alternate sources to consider:

-If you've planted non-hybrid seeds in previous years and have saved your seeds for planting this year, congratulations (and be generous with your gardening friends). This is the ultimate way to obtain seeds – by saving your own. Ultimately this is the position in which everyone should be. (Learn more about saving seeds here.)

-Ask your gardening friends for any surplus seeds they can spare. They may also be able to offer helpful planting advice.

-Big box stores may still have seeds. Home improvement stores such as the Home Depot or Lowes, or any large store with a gardening department (Wal-Mart, Ace Hardware, etc.) stock up on seeds this time of year. (The question is whether or not they've been cleaned out.)

-Speaking of small, consider purchasing from smaller online seed dealers, often mom-and-pop enterprises such as Seed Treasures (www.seedtreasures.com). They have hand-packaged inventory which larger dealers may lack. Look through classified ads in the back of rural-themed magazines to find small suppliers.

-Check farm supply stores for bulk seeds such as corn, beans, peas, seed potatoes, and onion sets. These can be divvied up among gardening friends and neighbors.

-If you have seed packets that are several years old, don't hesitate to plant them even if they're "expired." Germination rates may be lower than with fresh seeds, but who cares?

-A surprising number of ordinary items from the grocery store can be grown. Some can be purchased from bulk bins, others are packaged. Think in terms of dried beans (any type), popcorn, raw peanuts (do NOT remove the paper skin or they won't grow), raw sunflower seeds (in the shell), and spice seeds such as poppy seeds, coriander, fennel, and mustard seeds.

-Harvest seeds from grocery store produce. Tomatoes, bell peppers, cucumbers, zucchini, melons, fresh corn (let the kernels dry on the cob first) – all have seeds which can be planted. Of course, you won't know if the produce is hybrid or not, but plant them anyway. What do you have to lose? The worst that can happen is the resulting plant may not be identical to its parent plant.

-Sprout new plants from grocery-store produce, often from the leftover root ends. This method often requires nothing more than a jar of shallow water (into which the root end is placed) and a sunny windowsill. People are growing leeks, green onions, cabbage, lettuce, celery, bok choy, mint, basil, rosemary, and fennel fronds. Change the water when it gets cloudy, but otherwise just let the new plants grow. Commercial potatoes and sweet potatoes are often treated with a sprouting inhibitor, but many people have fine success in growing them anyway (make sure each planted piece has at least one eye). People have even sprouted avocado pits, raw coffee beans, and pineapple tops.

-Try seed exchanges. These are non-profit or volunteer groups of passionate gardeners who conserve and share seeds. Seed exchanges can be local, regional, or national.

It goes without saying these alternate sources may not provide you with exactly the varieties you were looking for, but now is not the time for tunnel vision.

Nor can you be too purist about planting only non-hybrid or heirloom varieties. Most (though not all) commercial seed packets you find in box stores will be hybrids. Right now, this doesn't matter. Buy what seeds you can. Also, while sometimes seeds from hybrid plants are sterile, many times they'll grow; they just won't produce the same kind of plant as its parent plant. But in emergency times, the important thing is to grow food, so plant your hybrid seeds and see what happens. You can scout around for non-hybrid seeds later.