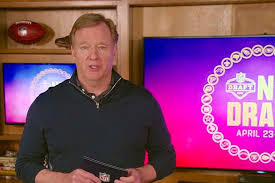 "It is clear that the economic effects will be deeper and longer-lasting than anyone anticipated and that their duration remains uncertain. The downturn has affected all of us, as well as our fans, our business partners, and our clubs," Goodell wrote in the memo. "We hope that business conditions will improve and permit salaries to be returned to their current levels, although we do not know when that will be possible," he added.

The move is telling because the NFL is in its offseason. ESPN's broadcast of draft coverage last week garnered record ratings. The league ostensibly shouldn't be losing money at this time.

Granted, how quickly governments will open up remains uncertain. There is a strong possibility that NFL teams will play games in empty stadiums. But the vast majority of the NFL's revenue comes from television and merchandise. Goodell's proactive moves tell me he's expecting a protractive and deep dip in league revenues.

Ad sales plunge in May as lack of NBA hurts Disney, WarnerMedia