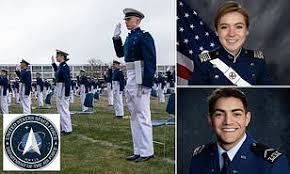 Having spent four years at the US Air Force Academy in Colorado, Jonathan Novak, Aaron Brooks, and Katie Scheibner made the switch last month

Novak, Brooks, Scheibner, and 83 other cadets stood distinguished among their graduating class with platinum ribbons tied around their waists

For Scheibner, a cyberspace operations officer, the chance to be a part of such a historic moment was an opportunity too good to pass up on

Much like Scheibner, Novak and Brooks saw the Space Force as a gateway toward irresistible opportunities

Novak boldly emailed chief of space operations Gen. John Raymond, expressing his interest in the Space Force and saying he was ready to make the switch

Also hoping to make a positive impact on the Space Force is fellow 2020 graduate Bradlee Ang, who said it was 'awesome' to be a part of history