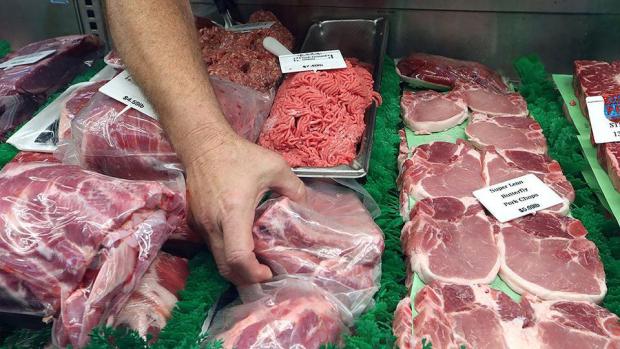 (WKBN) – Meat processing plants have been affected by COVID-19. Now, some major grocery store chains are limiting how much meat you can buy because they are receiving fewer meat products.

So, when you head out to get your groceries this week, you might not be able to get everything you need.

"Tons of customers, new customers coming through just because a lot of the grocery stores have got a pause in their chain because we don't use the same suppliers as them," said butcher Will Lightner.

Giant Eagle is limiting ground beef products and on-scale meat items to two per customer, but those limits may not be necessary for local butchers and farmers.

Lightner's Fresh & Smoked Meats in Struthers said people have been coming in because they typically have what the big stores don't.

"Chicken breast and ground beef, like the 80/20 and all of that," Lightner said.

Most of Lightner's' orders have been filled and they think that having two different suppliers has helped.

"In the past, when I call to order something, it's there and ready to go the next day I need it. Now, we've kind of had to play the game of, is it going to be here tomorrow or later on in the week?" Lightner said.

At one point, Lamppost Farm in Columbiana had to limit how much chicken customers could buy, but the biggest problem right now is getting their cattle processed.

"We have cows that can be butchered but the earliest date we can get them to the processing plant is June 24," said Melanie Montgomery, director of organizational life at Lamppost Farm.

Montgomery said she and her husband are even looking to get more land and raise more cattle, but that wouldn't make any sense right now if they can't get what they currently have out to the customers.