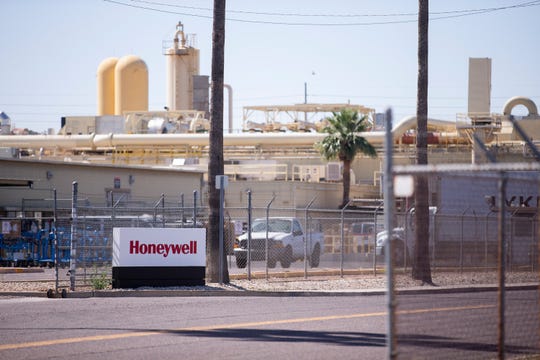 Trump's trip to Phoenix will highlight Honeywell International, a North Carolina-based aerospace defense contractor that is producing millions of N95 respirator masks for the U.S. Department of Health and Human Services to support health, safety and emergency workers.

The company announced in late March it was expanding its manufacturing capabilities in Phoenix to produce the masks and Trump displayed the company's efforts during a briefing in the White House Rose Garden.

At that March 30 event, Trump said Honeywell — and other companies — were "fulfilling their patriotic duty by producing or donating medical equipment to help meet our most urgent needs.

"What they're doing is incredible," Trump said.

Republican Gov. Doug Ducey, who set more definitive guidelines Monday for nonessential retailers to reopen, is scheduled to greet the president on the tarmac.

Unlike the president's previous visits to the state, this one is expected to be tightly controlled and confined to the Honeywell location, which is near Sky Harbor International Airport.

Standard masks don't stop viruses; they only stop bacteria. However, if the virus gets onto the material of the mask somehow, it might live 2 or 3 days rather than only the few minutes it lives in the air.

State Universities Admit They Indoctrinate Instead of Educate

How Arizona'lost control of the epidemic'