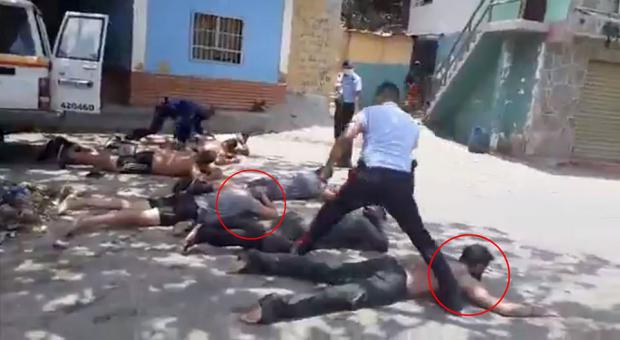 The moment two U.S. former special forces soldiers were arrested in Venezuela was dramatically caught on video as their 'plot to assassinate President Nicolás Maduro' was foiled.

The footage shows Luke Denman, 34, and Airan Berry, 41, being led from a fishing boat alongside six Venezuelan mercenaries and being forced to lie on the ground at gunpoint.

The coup was coordinated by an ex-Green Beret named Jordan Goudreau, 43, who says the objective was to capture Maduro. Goudreau claims to have built a force of 300 men, reportedly backed by US billionaires.

President Maduro called the arrested men 'terrorist mercenaries' and blamed the attacks on the Trump administration, Venezuela's opposition leader Juan Guaidó and neighboring Colombia, all of which have denied involvement. The U.S. has backed Guaidó as the country's leader.

On Tuesday, President Donald Trump denied any involvement by the U.S. government.

'We'll find out. We just heard about it,' Trump said when asked about the incident and the Americans' arrests. 'But it has nothing to do with our government.'