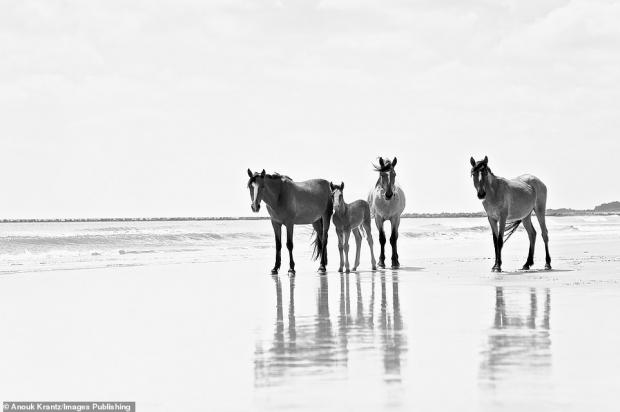 Cumberland Island is one of America's most bewitching locations – home to the only unmanaged wild herd of horses on the east coast.

The spirited animals have been photographed over 12 years by French photographer Anouk Krantz, captured in enchanting images as they continue to roam across this remote, largely deserted landscape off the Atlantic coast of Georgia.

The pictures first appeared in book Wild Horses of Cumberland Island in 2017 – and the publisher, Images Publishing, has now released a second edition. It contains new equally mesmerising images – some of which are showcased here. They capture some of the 150-strong herd of horses amid their serene sanctuary's white-sand beaches, immense rolling dunes and old-growth maritime forests.

It's a truly magical place – with a fascinating, at times bloody, history. It's thought that horses originally would have arrived with Spanish settlers in the 17th century. There were plantations and Civil War battles there in the 19th century, with the Carnegies buying most of it in the 1880s.

They sold it to the National Park Service in 1972. But a descendant of original owner Thomas Carnegie, Oliver 'Mitty' Ferguson, runs the island's hotel, The Greyfield Inn, which hosted the wedding reception of John F. Kennedy Jr and Carolyn Bessette in 1996. They married in the island's minuscule First African Baptist Church.

Anouk told MailOnline Travel: 'For me, a visit to Cumberland Island with its endless stretches of white-sand beaches and dark, old-growth oak forests draped in Spanish moss, as well as its pristine creeks and tidal flats, are a powerful reminder of the inherent natural good that is within each of us, and that to find peace and comfort we often need less in our lives, and not more.' Scroll down to see some of the beautiful new images she's taken for the latest edition of her book...